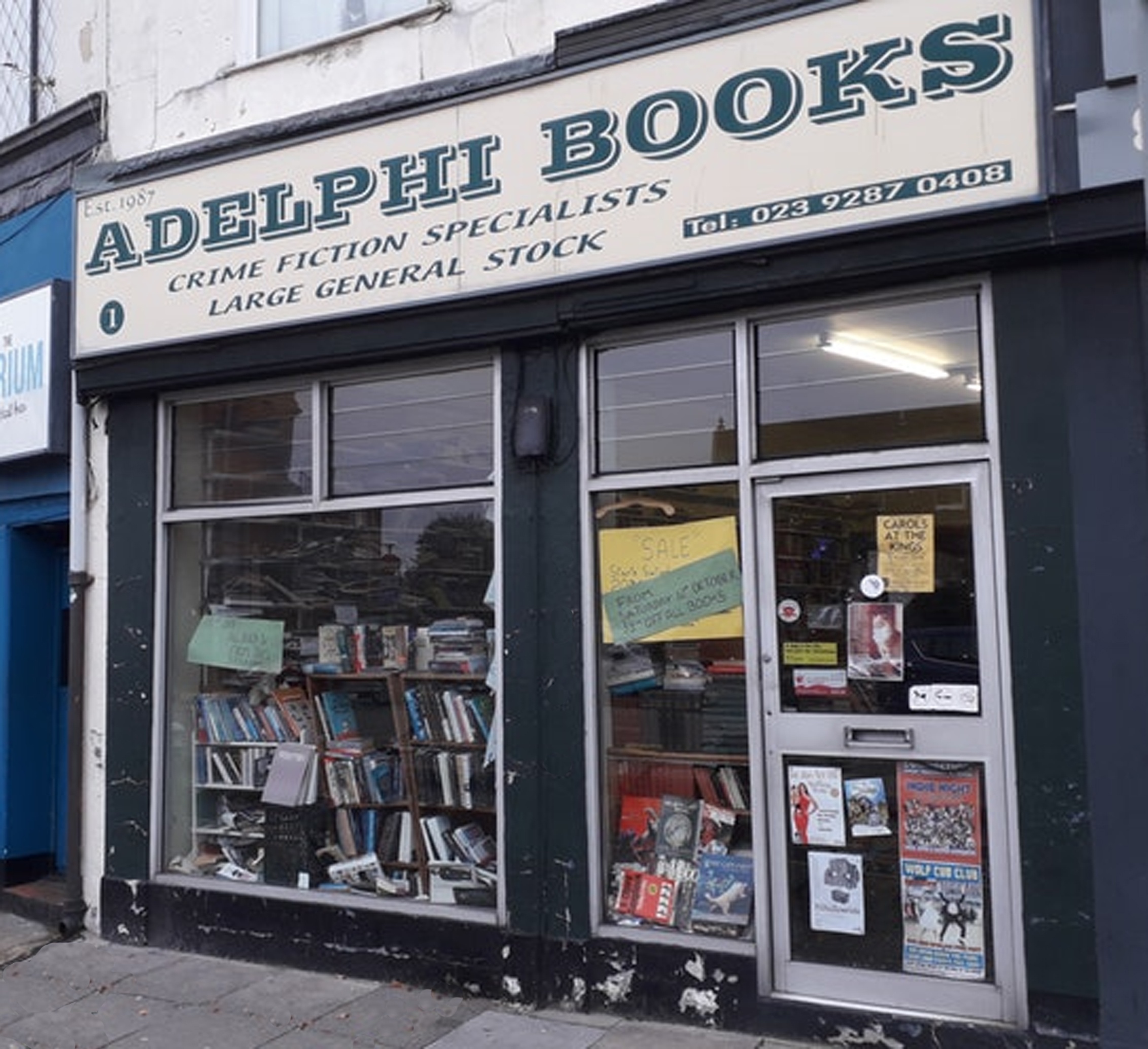 It is a sad coincidence that exactly a week after I retweeted the Petersfield Bookshop’s forlorn tweet about making no sales, I found myself invited to attend a wake for another bookshop.

Adelphi Books in Albert Road, Portsmouth, was part of the furniture for the last 32 years, run by a friendly, helpful and always kind bookdealer, Rob Smith. I’ve been buying books from Rob for at least 25 years – probably for longer.

Rob has always been a very honest and straight dealer. Little things remind me of the way he operates. Once, miscalculating an amount and overcharging me by 50 pence, he went out of his way to message me and let me know his mistake.

His specialism was, and still is (despite the fact that his shop is now closed), crime fiction from the 1920s onwards, as well as film books, but his shop also dealt in general fiction and non-fiction, with a strong local interest section.

It was a small single room with rows of shelves and bookcases in one of the Victorian units on Albert Road – Portsmouth’s street of unusual shops run by independent traders who have defied the corporate yoke and are still free-minded enough to stay fiercely self-reliant.

In an increasingly corporate world, it’s a tough job.

I’ve seen Adelphi Books go through dark moments in the past. Of course, because of their nature as one-man-bands, such owner-run shops are often an extension of the inner life of the vendor.

I know from personal experience that one danger of running a secondhand business is the frisson that comes from buying a bargain – and how it can be used to offset bigger problems. One can end up buying stock to fill the void in just the same way as food addicts bolt choccies or alcoholics drown their sorrows in whisky.

Thus, there was a period in the late ’90s in Adelphi Books’ history, when divorce and unhappiness at the death of a friend had settled in so badly that the stock level rose so high it was impossible to get through the front door. Books balanced in teetering piles threatening to overtop and crush unwary customers. Rob stood at the door, treading on books and not allowing anyone in in case they also trod on the books.

This bleak time for Rob was thankfully short-lived.

Friends and family stepped in to support him, and Rob’s shop returned to what it always had been – a slightly shambling collection of unusual, interesting and well-priced items. For most of its 32-year history, the Adelphi was a bookshop whose shelves were piled with the eclectic and the notable.

The Adelphi’s real problem was one that I see with many bookshops struggling to be noticed.

Like me, Rob grew up before the internet. Furthermore, to save money, the shop did not have a telephone line. In its early years before mobile phones, customers would leave a message on his home number, and wait for him to get in from work to answer. Later, Rob got a mobile. With no phone line, there was no internet. All Rob’s online cataloguing was done through a colleague.

Without full utilisation of the net, it wasn’t obvious how to get the word out to a wider audience that here was a place worth visiting. How many more bookshops, I wonder, are tucked away like this, with a tiny digital footprint?

As well as a committed and engaged – but dwindling – band of dedicated customers, comprising bookdealers, collectors, bibliophiles and bibliomaniacs, the shop also relied on passing trade. In an era in which many people are losing the habit of visiting physical stores, Rob still made a modest living.

And that is an achievement, especially if you set these adverse trading conditions against the backdrop of Portsmouth, which is a poor town comparative to its neighbours, where finding wealthy clients can be a struggle.

This shop, then, was at the budget end of the trade. Yet Rob lived on its earnings for 32 years, providing excellent, friendly, honest and helpful service while offering an impressive selection of crime fiction and other books.

What really did for the shop is that Southsea, the seaside suburb of Portsmouth, and especially Albert Road has started to rise in value. A few years ago, hipster bars replaced many of the traditional pubs, and there is a constant through-flow of students on nights out, spending their overdrafts on forgetting how much overdraft they have spent. Shop rents have thus increased to reflect this inflow of money. In the last rent review, Rob saw an increase of nearly double, from £5250 per annum to £10,000. It was tight for Rob before, but this hike made it impossible for him to earn a living.

After a long fight, Rob closed his doors on Sunday 19th January. In the end, he gave away a large proportion of his stock, because the pressure was on to vacate. All Rob asked for was a donation to charity or “whatever you want to give me.”

It was a heartbreaking moment, and Rob was emotional. I wish I could have done something for him, or had thought to put out an appeal. I just didn’t know what to do.

Adelphi Books wasn’t a spectacular shop, but it was always an interesting one. For someone like me who also makes his living from books, I salute its memory. I am sure there are many other independents in exactly the same predicament that Adelphi Books and The Petersfield Bookshop found themselves in – backs to the wall, overheads spiralling, customer base declining.

If we don’t want to suffer losing more of these islands of individuality to the faceless sameness of e-commerce, we need to do more to support them.

An international day celebrating the uniqueness, eccentricity and sheer vibrancy of bookdealers and of independent retailers generally – these pockets of resistance to corporate uniformity and the sensory-deprived blandness of the online experience – would be a start. How to go about it, I’m not sure. But it’s needed.

For now, let’s remember Adelphi Books and the many other bookshops that have closed in the last ten years. When you are next thinking of buying something, spare a thought for the individuals who run local shops – these ordinary and not-so-ordinary people who have consciously decided to step away from the relative safety of the corporate environment to go it alone.

They are members of the local community, and they are, in many ways, an endangered tribe.

Help them, if you can.

Buy a book or two – or whatever it may be – from your local independent.

They will thank you for it. What’s more, you will make your town a less identikit kind of a place – and the world a less predictably corporate one, too!