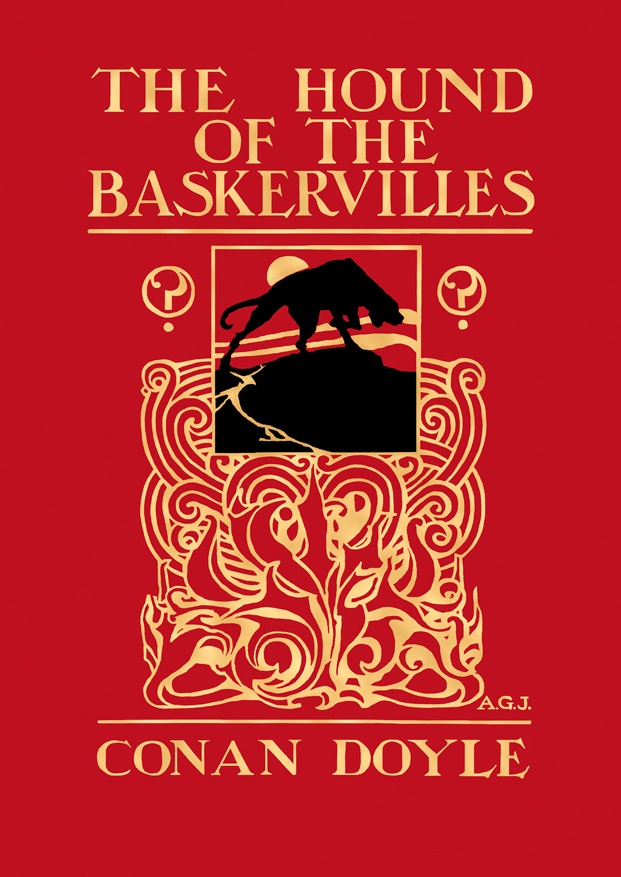 The iconic cover of the first edition of The Hound of the Baskervilles, the famous Sherlock Holmes novel by Sir Arthur Conan Doyle is now available as a poster up to A2 size.

Arthur Conan Doyle created Sherlock Holmes while he was working as a doctor in Southsea, a suburb of Portsmouth. Now, Southsea-based author Matt Wingett has faithfully redrawn the cover to enable fans of Holmes to enjoy the image in a brand new, sharply produced image to go on your wall.

“The original image was embossed in gilt on cloth,” says Matt. “This means getting a high quality image was difficult, since the grain of the cloth interfered with the shapes in the design. That’s why I decided to completely redraw it, staying totally faithful to the original.”

Matt says reproducing it in this way has given him a fresh appreciation of the design’s subtlety.

“The image of the great hound with the moon behind him is striking, but more puzzling to me was the interlacing gilt beneath the image. When I paid more attention to its organic shapes hidden beneath the ground, with with one shoot striking upwards out of the black earth, I realised how the design symbolised the hidden tangle of deceit that really lies beneath the legend of the Black Hound of Dartmoor, that in the novel haunts the Baskervilles. I really came to love this image, with its question marks in circles on either side.”

Matt took several weeks to get the image right. “I’m proud of the new image,” says Matt. “And of course, it will be sent from Southsea, from my home, which is just half a mile from where Conan Doyle created Holmes. It’s a great honour to be associated with the author, even in such a small way.”

Matt has also written an account of Conan Doyle’s Spiritualist beliefs, as well as reprinting the Beeton’s Christmas Annual 1887, which included A Study In Scarlet – the first appearance of Holmes – written while Doyle was in Southsea.