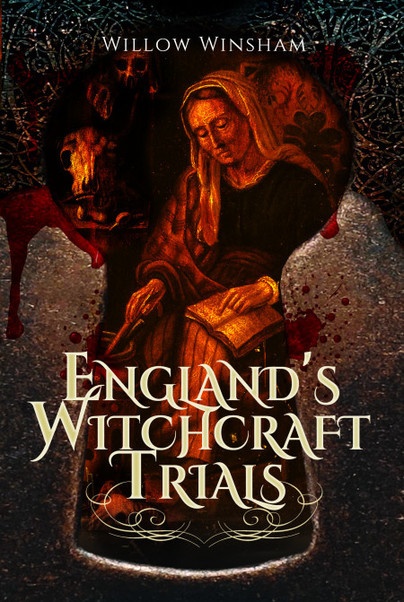 As a publisher, we’re always interested in seeing what great work other writers and publishers are doing – especially in the realm of the strange, of the historical and of folk horror. In a recent exchange on twitter, author Matt Wingett got to find out about Willow Winsham’s excellent book England’s Witchcraft Trials. Here’s a review of this fascinating work.

Whether you’re a believer in the possibility of witchcraft, a student of history, a witch yourself or an out-and-out sceptic of all things supernatural, Willow Winsham’s fascinating account of the persecution of witches during the British period of the European Witch Mania of the late Middle Ages and early modern period has numerous lessons to teach.

The Witchcraft Act was passed in England in 1566, and over the following 100 years or so saw the execution of 450 people, mainly women. Willow takes five of the more notorious cases and examines them closely.

In many ways, the stories are distressingly similar: A member of the community is taken ill. Doctors advise that because they can’t find a cure, there must be a supernatural element to the sickness, or a member of the community suspects that is the case. Suspicions are raised against an individual who is usually an outsider or in some way disliked by the community – and suddenly witch mania catches light, numerous other women are found to be in league with the first accused, and a nefarious and apparently rather pointless plot by the devil to spread misery on earth is discovered.

From here, a trial relying on circumstantial evidence pulling suspiciously similar confessions from simple countrywomen who have either been terrified into co-operation, or promised leniency, ends in the witches being found guilty before an outraged, astonished and fearful community. After this the poor objects of community wrath are almost invariably executed.

Reading this book is in many ways an object lesson in how a set of pre-existing beliefs will shape the outcome of an investigation. Even with the distance of 400 years, it is both frustrating and distressing to see the benighted attitudes of those dispensing justice, and the apparent willingness of women and men to condemn themselves out of their own mouths.

With careful attention to court documents, pamphlets, parish registers and other resources, Willow Winsham has recreated those times with extraordinary power. There were moments when reading this book that I felt I couldn’t go on, I was so frustrated with the testimony being shaped by the interrogators as they sought to bring their supposed witches to the gallows.

At times, the motives of some accusers stand out as utterly baffling. The daughters of women accused of witchcraft level lurid accusations against their own mothers. Children supposedly cursed by a witch clearly derive sadistic pleasure from their deadly game of feigning illness in the accused’s presence, despite the accused pleading otherwise and utterly baffled by the disaster engulfing her.

At other times, the behaviour of the accused witches is equally puzzling to the modern mind. Why would a woman admit to having sex with the devil, to suckling demons through unnatural teats, of making “pictures” (poppets or models) of their victims into which they drive pins, of keeping demon familiars and attending a coven? Thus, while the stories unfold with fascinating detail, one is left wondering at the psychological state of all involved, and at the sense of fatalism that must have overcome the accused witches, who thus resigned themselves to being the projection board for all the fears and prejudices of a court that was anything but unbiased.

It is true that some of the witches had already built themselves reputations for having powers that brought locals to them in times of need. But what really comes through is these poor women’s ignorance of the bigger picture and precedence in other parts of the country, as they enter into a deadly game of firstly denial and then confession – perhaps hoping to bring the ordeal to a close and protect other members of their family.

This last invariably proves a forlorn hope. Since witchcraft was viewed as akin to a disease or hereditary illness that must infect other family members and friends, the accusations spread wider and wider still, rippling out across the community. Clearly, the whole phenomenon was used by those seeking to scapegoat others, settle old scores or in the misguided belief they were doing the work of God. Whatever the motives, the gallows awaited at the end of these true-life calamities.

The five well documented accounts here told include two of the most famous names in the history of English witchcraft. Those are, firstly, the village of Pendle in which a genuine witch-hysteria appears to break out, abetted by rivalries between two families of traditional healers; and secondly, the name of the infamous witchfinder Matthew Hopkins.

The real attraction in all these accounts is the way Willow doesn’t sensationalise them. She pushes past later retellings and dramatisations of the events to relate as accurately as she can the true stories of the (mostly) women accused, the behaviour of their tormentors and accusers, the accused’s own sinking sense of losing control of events and at times a fatalist acceptance of what is going to happen to them.

Because of the long gap in time between then and now, there are countless questions left unanswered. The psychological motives of the accusers and the accused, the set of cultural circumstances that could even lead to this persecution arising, the acceptance by many of what the modern mind knows does not even meet the most basic tests for evidence, what actually went on between witchfinders and their victims, the secret deals the witches thought they might be making, the lack of good faith on the part of the courts… There is much drama in this book, and it is well worth a delve.

England’s Witchcraft Trials by Willow Winsham is available from Pen And Sword Books www.pen-and-sword.co.uk for £12.99, and from all good retailers, including Amazon. ISBN 9781473870949.