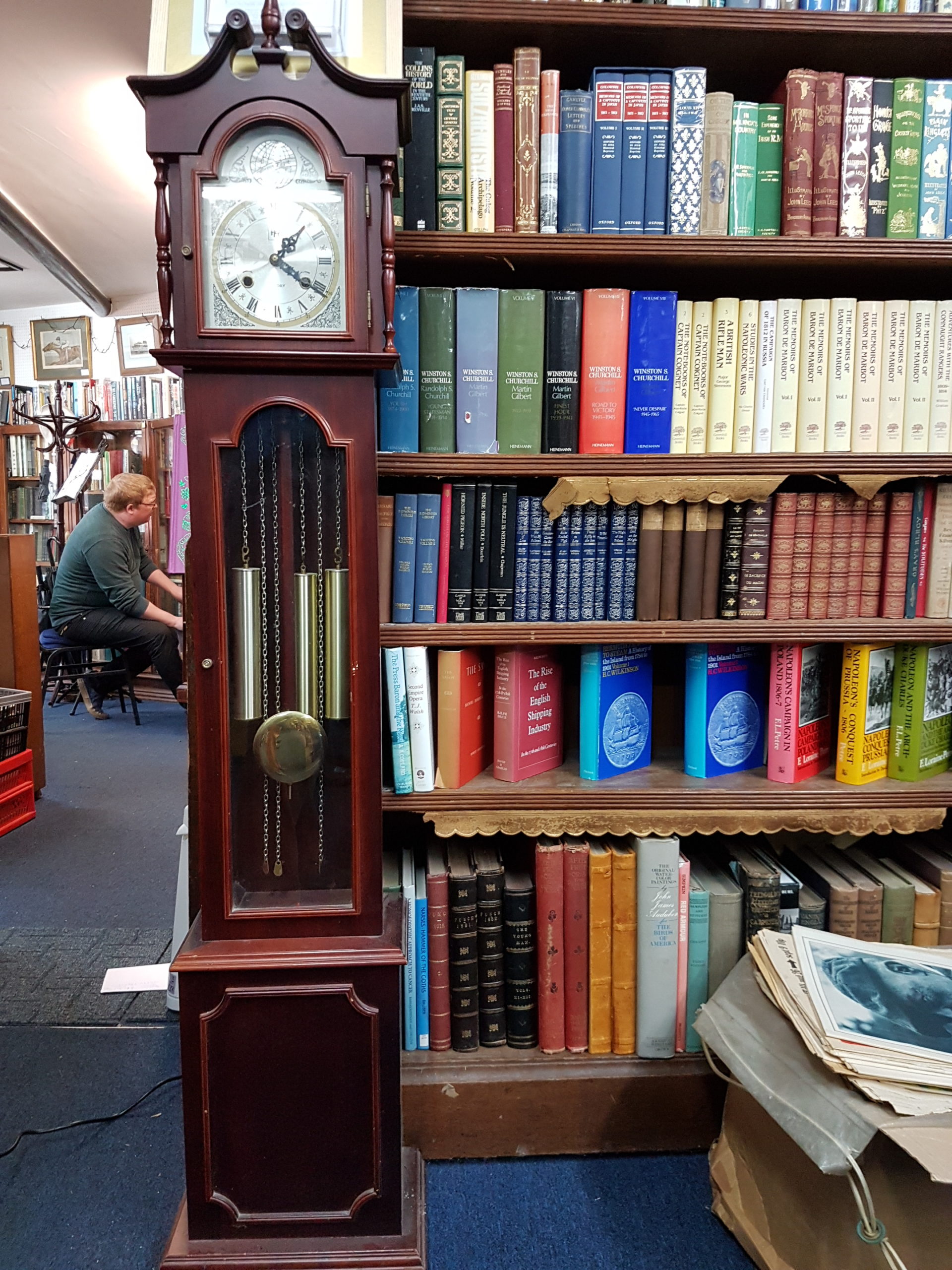 A year after The Petersfield Bookshop’s viral “tumbleweed” tweet, bookseller Robert Sansom reflects on how retweets from Neil Gaiman and Gyles Brandreth among many others, changed life at the shop for good

MW: Robert, tell us why you sent out your famous “tumbleweed tweet” that went viral.

RS: It was a miserable day. Storm Brendan had just cruised in from the Atlantic – the rain was relentless. A few people came into the shop during the day but not a single one bought a book. I don’t blame them, they came in wet-through, probably just looking for a bit of shelter, and had other things on their minds. It wasn’t till the very end of the day that I realised there hadn’t been a single sale.

It can be very dispiriting working in a shop with barely any customers. There are only so many times you can tidy the shelves or check the emails.

So, by the end of the day I was very ready to go home. But I wouldn’t say that I was feeling desperate about it. I checked with colleagues and no one could remember another occasion when the shop had been open and we hadn’t sold a single book.

I took a few photos of the empty aisles as I was locking up and just tweeted them likening the place to an American ghost town by using the word tumbleweed.

We happened to be having a sale on our online site so, more in hope than expectation I pointed this out with a link at the bottom of the tweet.

MW: And what happened next?

RS: I went home. It’s a half-hour drive to home and by the time I got out of the car I thought there was something wrong with my phone. The thing wouldn’t shut up and it felt hot to the touch. There seemed to be something wrong with the twitter app, so I closed it and restarted the phone.

By the time I got into the house and the phone had restarted it just kept pinging again. Then I realised that the numbers under the tweet, the likes and retweets were going round in real time. I didn’t know that could happen.

Messages started coming in. People sympathised, of course. Then someone said, I’ve bought a book, and another and another. It was great to hear but I still didn’t properly understand what was going on. Then I noticed that Gyles Brandreth had retweeted us and I thought maybe that’s given the tweet some traction.

Then – Neil Gaiman. Now, Mr Gaiman has over 2 million followers. It’s probably true to say that most of those people like to read a book and feel affection for the very idea of bookshops. That was when it really took off.

Thousands of likes, then ten-thousand, fifteen… Messages just kept coming. I was answering as many as I could but by 2am I couldn’t keep going any more. It wasn’t till the next day when I got to work I discovered there had been over £1000 of books ordered overnight.

It wasn’t till the next day that I discovered it had been you who had put the tweet in front of Neil Gaiman that evening.

MW: And what about the following week?

RS: Honestly it still gives me chills to think about it. As the days unfolded it got bigger and bigger. The orders kept coming in. People all around the world heard the story and wanted to be involved. We had to organise volunteers on a Sunday to come and help pack books. We basically lived in the shop for two weeks.

I don’t know how it first got into the press but within a few hours we had phone calls coming in. John did all the television and I did the radio interviews. On one day alone there were 25 radio interviews. Local and national television news crews and The One Show were all falling over each other in the shop.

Every time you went to get a book from a cabinet to fulfil an order there was a camera pointing at you. Newspapers around the world and all the nationals here found a way to cover the story. It reached something of a climax in the shop on the Saturday afterwards when the customers, jammed almost shoulder to shoulder in the shop were moving around grinning madly and asking each other how far they had travelled: one couple came from Manchester.

There wasn’t a great deal of time to stop and think about it or process what was happening but every now and again during the weeks that followed you would stop and choke-up a little bit at just how amazing it was to be at the centre of such an outpouring of concern. We went from having a fairly ordinary 1,200 followers to about 22,000 in just a few days. We took 36 sacks of books to the Post Office.

MW: And since then? Did you keep your followers? And if so, what’s the secret to keeping them?

RS: Our following has stayed more or less steady on twitter ever since. It has been fascinating getting to know a group of people like that. Some very regularly interacting, others not, but one of the most interesting things about it has been that you get instant reaction. The social media paradigm of ‘likes’ means you get a very immediate sense of what people enjoy about your output and what doesn’t interest them.

I know now that our followers are big fans of natural history books, they go nuts for Folio Society books but they aren’t too moved by poetry. Pictures of books are often well-liked but people clearly respond really well to hearing the funny little goings on in the bookshop too.

MW: And what about the rest of what turned out to be a really tough year?

RS: It wasn’t very long after all this had finally begun to slow a little that Covid was suddenly upon us and we were told to close by the government. We had gone from Viral to Virus.

But now, we had 22,000 people to talk to. We don’t need to do a ‘hard sell’, I just wave a pretty book at people on twitter and usually within the hour someone enquires about how much it is: direct messages, paypal and email mean that they can often have bought it and the book is in the post within a couple of hours of me tweeting it.

Thinking about it, I honestly don’t know what we give our followers but I suppose I hope that they enjoy the books and feel some kind of connection to the shop, even if they are on the other side of the world. We have so very many new customers now and we know what they are after so we often contact them directly if something comes in that we think they will like, all because of an initial connection on Twitter.

I hope also they get some optimism. I think optimism is a really important quality right now. It is very easy to be pushed into reacting against things all the time and sometimes hard to turn and be ‘for’ things.

I believe passionately that books are not just an escape but a way of gaining a broader perspective and understanding that there are always things to be moving towards.

MW: And how did “the Twitter Fairy” come into being?

RS: (Laughs) Oliver who runs the best bookshop twitter account in the world for Sotheran’s in London occasionally refers to himself as their Twitter Goblin, so the Twitter Fairy was a bit of a tongue in cheek homage really. We also have a Packing Troll (John) and I notice another bookshop now talks about its Social Gnome so clearly the whole thing is getting very out of control. There are some big challenges ahead still for sure. We still have just a skeleton staff and we had created a number of shop units some years ago from the huge footprint of the original shop and two of those have packed up and left this year so we have lost two significant rents. But the shop is now in a better spot financially than it has been for a long time.

And to celebrate a year on from that tweet, we had author Gyles Brandreth take over from the Twitter Fairy on Sunday 8th, giving wonderful readings from all sorts of books.

MW: And from what I see of your tweets, it’s not all about you?

RS: Right. We have been trying to give a little of it back or ‘pass it forward’ I think is what the young people say. Having a lot of people to talk to means it’s possible to ask them to give someone else, maybe another bookshop or a small publisher, a bit of a boost too. We are not talking to 2m people like Neil Gaiman but it seems to have made a difference sometimes when we do a ‘shout out’ to other people and ask our followers to take a look at them.

MW: Do you have any advice to other people struggling during this time, and to other traditional retailers who have struggled generally to keep their heads above water?

R.S. I wouldn’t presume to give advice. What happened to us was luck – lightning strike, one in a million kind of luck. I often reflect on how many things had to go right for it to have happened as it did. For example, you had to see the original tweet at the right time and think to yourself, in what I assume was no more than a casual moment at that point, to @ Neil Gaiman with it.

Then Neil Gaiman had to be online at the right time to both see that, and he had to decide to retweet it. I know as someone running a twitter account of tens of thousands how many messages and @s we get everyday, I can’t imagine how many he must get and so the decision to retweet or comment must have been a spur of the moment thing. Beyond that though, it didn’t have to take off. He could have retweeted it, and we could have had numerous messages of support and a few book orders and that could have been it. There was an indefinable something that made this one take off, not just online but in the real world of buying and selling books and it travelled around the world. I suppose if I was going to offer advice it can only be ‘ride your luck’, when something comes along, make the most of it you possibly can because …optimism.

And really, it was just extraordinary luck. The last time I looked, that tweet had been seen by 4.3million people!