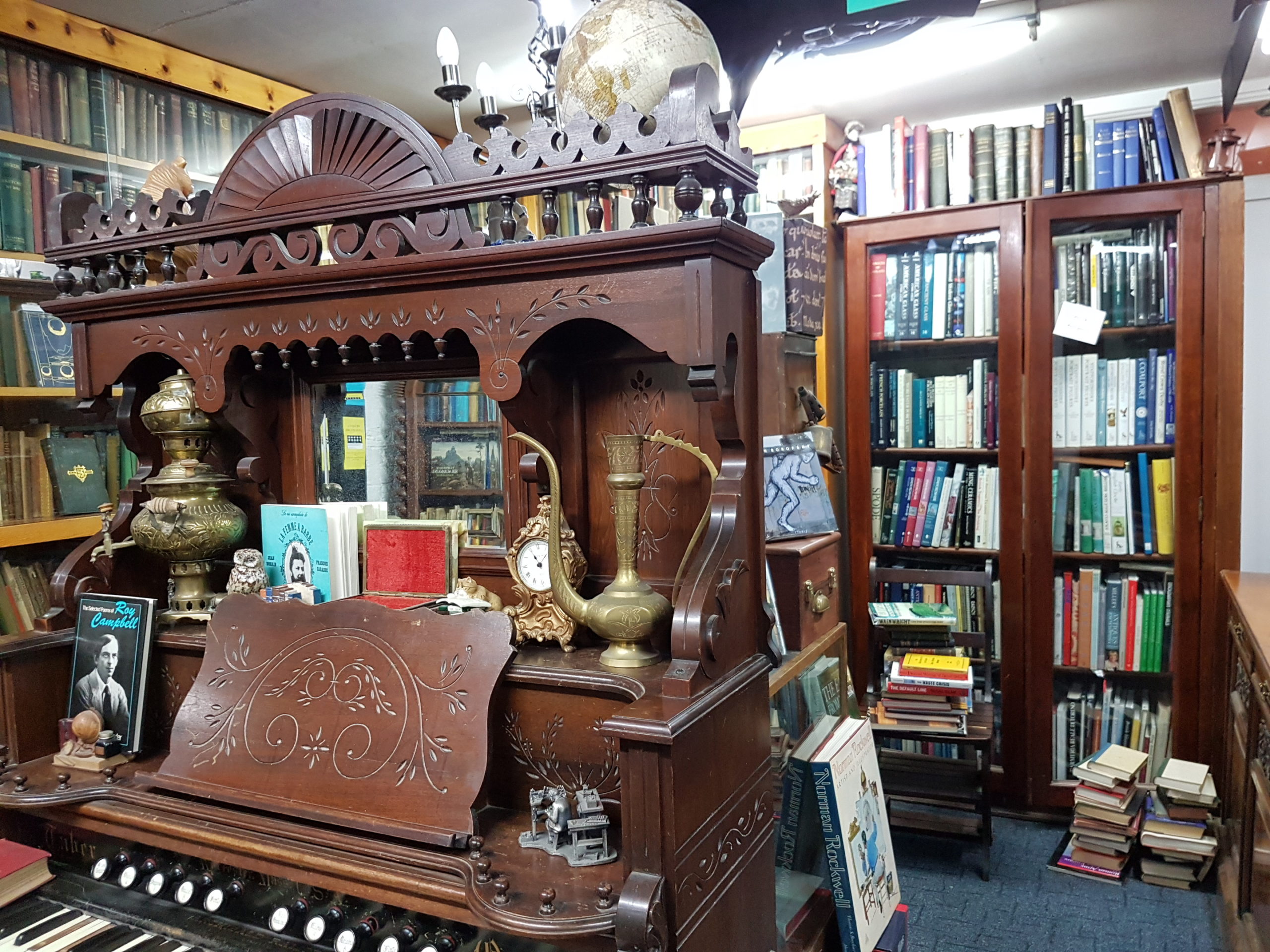 Wow. That was totally unexpected.

Yesterday, I was looking through my tweets when I saw a message from some friends. It really moved me, because I’ve known them a long time and I hated to think things weren’t going so well for them. It was this one:

Not a single book sold today…

We think think this maybe the first time ever…

We know its miserable out but if you’d like to help us out please find our Abebooks offering below, all at 25% off at the moment…. pic.twitter.com/Cn5uhYWw88

That feeling was painfully familiar. I worked for seven years as a rare bookdealer. There were times I sat in my office waiting for a sale to come in, not knowing what else to do, feeling lonely as hell – and getting desperate about whether I’d be able to pay the rent and heating. There was something else – sweet nostalgia. Because I’ve bought books at the Petersfield Bookshop since I was a kid.

I remember going in and seeing the (now long-departed) grand patriarch Frank Westwood sitting in state at his desk, surrounded by piles of books like an aged magician with all the tools to hand to cast the spell of words. He seemed terribly fierce when I was a kid, but as I grew older and I got to know him well, I realised what an amazing font of knowledge he was.

It was Frank who sold me two beautiful first editions – The Adventures of Sherlock Holmes and The Memoirs of Sherlock Holmes – in my early days as a bookdealer, knocking £400 of the price and bringing them down to £1200 to “give me a chance to sell them”. I loved the old boy and would go in and sit and chat with him for hours about books, about the book trade, auctions and much more besides.

Then, after he died, his son John Westwood took over – just as the market in rare books began to change beyond all recognition. I was an entirely online solitary bookdealer, but John had to cope with wages, rates, members of the public, keeping the shop presentable, and much more besides as the retail business and the sale of books metamorphosed. I watched John fight to keep the business going during the credit crunch when no-one had any money. I watched the general public’s habit of getting out to physical shops decline – and I saw everyone in the business at Petersfield Bookshop keep at it, as the shop changed, responded and moved with the times to keep up with the market, all the while creating an environment visitors will love to visit.

There is plenty to love! The shop has a wonderful cosiness to it, and John (who is himself a true eccentric in the nicest possible way) has moulded it to fit his personality. It has unexpected manikins on the walls and ceilings, little figures peering out, and, sitting at its heart, a church organ that doubles as a bookshelf. Perhaps most aptly, considering how much is crammed in this shop, there is even a bookcase shaped like the Tardis. That police call box is filled with crime novels – and the whole shop is stuffed with treasure!

So, when I saw that tweet, I was pretty sad. It seemed so forlorn. And I knew that to keep the shop going in a rough patch, John had sold his flat and was sleeping on a camp bed above the shop. What to do?

It was then I remembered someone I deeply respect online for his kindness and willingness to help others – and a man whom, I admit, I’ve got a bit of an obsession about because he was born in my home town of Portsmouth (and I am a nut about Portsmouth writers). So, I sent Neil Gaiman this:

@neilhimself, The Petersfield Bookshop is an extraordinary place that should really be cherished. I’ve bought so much amazing stuff in that shop over the years. Would you please put a shout-out for it. The message below breaks my heart… https://t.co/8bP7letGbO

A little later I got a message from the boys at the bookshop saying: “We owe you a drink.” I checked in with them to see what was happening, and found this:

What a night! We have been completely overwhelmed in a good way.

We have loads of online book orders.

We have over 300 messages, many asking after books. We will answer all as soon as we can, please bear with us

Thank you all so much!

Amazing. Of course, they didn’t owe me a drink, but they did owe Neil one, as I pointed out to them. I tweeted this to Neil again – because, hey, why not? And Neil responded kindly to that, too, with encouraging words – just a simple “I’m so glad”. Yet those few words will make an extraordinary difference.

Today, with the weather calmed and a bright sunny day shining down on a very wet and battered Hampshire recovering from a violent storm, I went in to see them. Overnight, they had received 300 messages and enquiries, and made a pile of sales. Even better, BBC Radio 4 news had featured them in a 5 minute interview on World At One, and they appeared in an article in The Guardian. Big, brilliant eccentric John came in, walked over to me, gave me a hug, and said: “Matt, we’re in the middle of a twitterstorm – in a good way!”

Here’s the thing. The Petersfield Bookshop has been around for over 100 years, and has been in the same family for 60 of them. For me, it’s a home from home. I love that shop. I love the smell of the old books, the sheen of the leather, the engravings and pictures on the wall. It’s precious. I hope, when you go there – you’ll love it just as much as me!

We live in a strange world. It’s the weirdest thing to think that a kind man whom I’ve never met on the other side of the world can make a huge difference to someone who has been down on their luck – just with a simple tweet. Let’s hold on to that thought amidst all the terrible news we keep reading and being told. We’re lucky to have people in the world who recognise that the fame they enjoy also has powerful influence – and with that power comes a responsibility to use it – not only wisely and ethically – but also kindly.

Neil Gaiman’s kind words through the ether on a rain-lashed night are exactly what it means to pay the love forwards. What a great start to 2020! Let’s hope it’s a good one for the guys at The Petersfield Bookshop and for everyone.

And generally, let’s have more kindness in the world. Why not? 🙂

For an update a year on from this lovely event, read From Tumbleweed to Twitter Fairy – The Petersfield Bookshop One Year On.

18 Replies to “Kind Words On A Stormy Day”